They say you can’t go home again. But it’s safe to saw (thankfully), that is not always true.  You may know Chef Patrick Hebert from our cooking classes in Paris and may have even heard part of his story but there is only so much you can say in class. He shares with us his return to France and the journey between two cultures. A journey not without a bit of culture shock.

Losing a job is not a very pleasant experience and even though it’s difficult, very often a door closes to let another one open.

In 1980, I was 26 years old and working in Paris. My boss got very sick and his wife decided to close and sell their beautiful restaurant. That very same week I found an article in L’Hotellerie, a professional magazine for a job offer in the US. A New Orleans based company was looking for a French chef for the opening of their second restaurant.

My first wife and I didn’t have children at the time so we were free to begin this adventure. We arrived in New Orleans in September. My first shock, coming from Normandy, was the heat and humidity. I had never experienced a subtropical climate before.  The second was the size of the cars, they were enormous, luxurious, and comfortable, yet the people were driving so slow and orderly. Nothing like drivers in Paris.

To us, everything in America was bigger: the cars, apartments, refrigerators, even the toothpaste tubes, and jam jars. And to our surprise everything ran efficiently. For example, it took us only a few days to get a telephone installed in our new apartment. At that time in France, it was still a long, laborious, and expensive process to have a phone at home.

It didn’t take me long to realize how bad my English was and communicating was not always easy. The employees who worked under me were very slow in comparison to how a kitchen was run in France. It was often very frustrating and it took me time to accept and adjust to these new working conditions. My relationship with management was also a surprise to me. They gave me their trust from the very first day and it was very important to me not to disappointed them. They were fair and generous, but tough in business.

French chefs were and still are esteemed in the US and it was funny to see the way people reacted when they recognized my French accent. After four years of working as a chef, I decided to open my own restaurant; good cheese, charcuterie, and French bread were in short supply and all the French people I knew were craving French cuisine. It took about a month to create the company, get a liquor licence, and obtain a construction permit. That was the easy part, the difficult part was being far away from our family. It wasn’t like today, international phone calls were very expensive back then and the only way of staying in contact was writing letters and waiting weeks or months for a reply.

After 30 years I decided to sell my restaurant and return to France. I knew the move would be hard, but I didn’t know it would be as hard as it was. My parents were aging fast and I felt I needed to be close to them after being away for so long. My kids had graduated from college by that time and they had built lives of their own.

What I didn’t expect was how difficult it would be to find a job. At 55 years old, it was considered a mission impossible in France. The same was true for finding an apartment in Paris, but my second wife and I were lucky, we found a great apartment and I found an even greater job at Cook’n With Class.

In the time I was gone, France had changed so much and after 30 years I had become very Americanized. I felt like a stranger in my own country. I was out of touch and had missed a lot, but I was happy to be close to my parents and my extended family. It took a year for me to feel at home again. I’ve rediscovered the good life and the rich culture of France. Not to mention, the good social coverage and work protection which are really a plus, but now my kids and my good American friends are far away. Then I realized that I belong to two different countries that I love immensely, two different cultures, and two different ways of thinking. I’m at home in both places and I know today that I am very fortunate to have had this extraordinary experience in my life. Most of all, I’ve learned that the grass is not greener in the other country, the shades are just different and beautiful wherever I’m at. 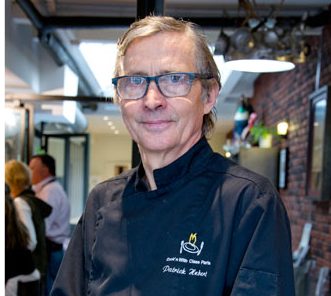 Trained in France, he established his career in London working for the Savoy and Claridges serving fine French gastronomy to the royal family and famous political leaders just to mention a few. Following Paris and London Michelin star experiences, Patrick then brought his talent stateside to Shreveport, Louisiana and obtained 4 diamond awards for his own restaurant Monsieur Patou.

12 Kitchen tools no cook should do without

10 Ways to Be a Better Cook When Entertaining