The 18th Arrondissement of Paris is known for its charming streets, picturesque views and numerous stairways used to navigate the hills that look over Paris. It’s a neighborhood that has always had a village feel and artistic history having been frequented by figures such as Van Gogh, Matisse, Picasso, and Renoir. But when you come to visit this little corner of Paris you need to know where to go to make the most of your visit, so prepare to save these addresses and be utterly charmed by what this hilly side of town has to offer. 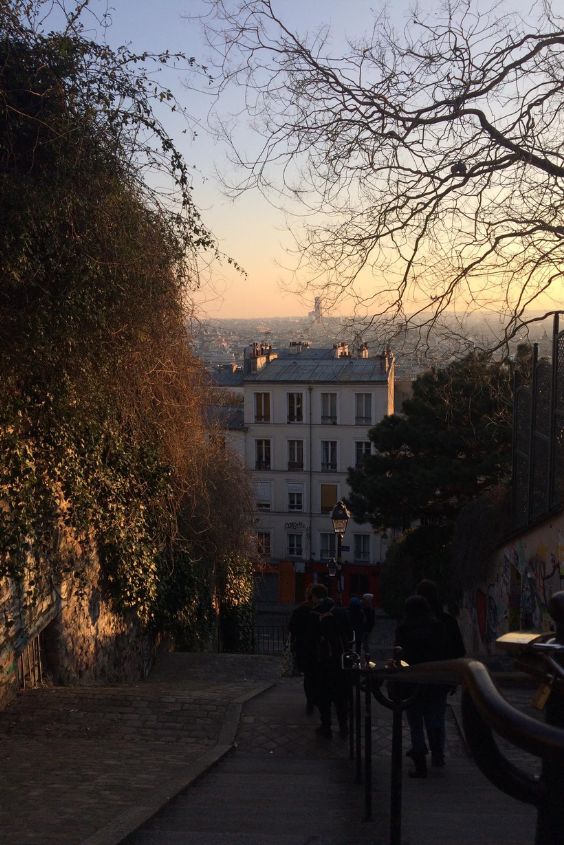 This is the fundamental monument of the 18th and it’s visible from many Paris viewpoints across the city. The signature white of the Sacré Coeur only gets whiter as time goes on as the stone chosen is adept at weathering the rainy Parisian days. The stone does not allow water to infiltrate as when in contact with rain, it releases calcite which cleans the surface and keeps the shiny white color. You can also enter the Sacré Coeur for what may be the best view of Paris!

After appreciating this magnificent structure, turn around and you’ll be glad you walked up all those stairs to the top of the hill! The view of Paris is breathtaking, particularly at sunset. A little further along to the right (when facing the view) you can also catch a glimpse of the Eiffel Tower, but the lights and life of the city that you can see from the view at the bottom of the Sacré Coeur will show you the Paris that the locals know, that can be recognized without the legendary tower.

The fabled artists that used to wander the streets of Montmartre certainly lend their spirit to this area, but they aren’t the only ones. At Place de Tertre you can get a coffee or a meal in quintessential French style but this area is also thriving with working artists and it is THE place to get your portrait taken in many different styles and artistic mediums. Just choose your artist!

Not far from Place de Tertre, is the hidden residence of the artists of yore. Renoir, Valadon, Utrillo and Duffy all spent time in this building, the gardens of which have now been called the gardens of Renoir and the building has become a museum to share the history of Montmartre.  Café Renoir can be found in the garden of this building and is a little green safe haven from the hustle and bustle of Paris. It’s very much one of the hidden terraces of Paris!

A vineyard hidden in plain site, tucked away in Montmartre. This is the last operational vineyard of Paris and it’s the star of the show during the Fete des Vendanges in October. The vineyard is typically closed to public, except for a select few tours available throughout the year (October is your best bet to secure a tour, some of which are even free but are highly in demand). You can still walk by the vineyard and try have a peek at what’s going on behind the gates.

Opening in 1928, this little cinema was the first to open with the sole purpose of exploring cinematography. French Cinema was having its heyday and film was appreciated as a high art. Poets, artists and directors would gather here to see the most audacious films, exhibitions and jazz concerts of the day. Nowadays it is primarily a cinema where you can catch more obscure films and a few recent releases. If you love the ambiance of old cinema, want a show and a glass of wine, then this place is for you.

A bar, a concert hall, a restaurant, a terrace and Paris history! This address is truly thriving, much like the greenery that grows around the abandoned train tracks of the Petite Ceinture that le Hasard Ludique has found a place on. There is always a new show or event going on here with a more casual urban feel to it. It’s equally a good place to grab a deckchair and enjoy the greenery that the abandoned train tracks created (it’s also a little exciting to explore an area that, when functional, is absolutely off limits). To read more about the beginnings of this location and see some of the amazing food they offer check out this blog post!

So we can’t introduce you to entertainment in the 18th without mentioning Le Moulin Rouge! Having continued to offer spectacles for over 100 years this place is mythical. Come here for a dinner and a show and truly soak up the history and culture of the 18th arrondissement. Check their website to see which show would interest you most while you’re visiting. 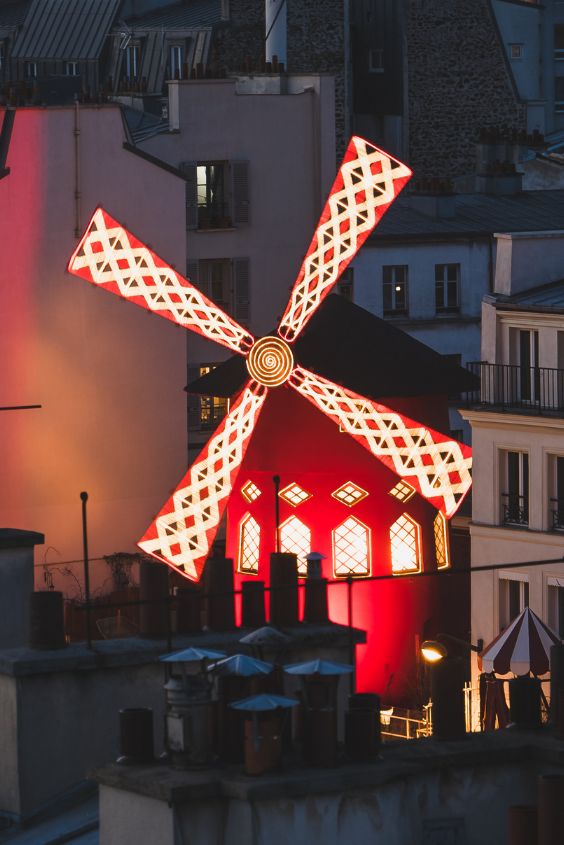 So you’ve climbed the famous stairs of Montmartre and now you’ve worked up an appetite. It’s time to head to Rue de Trois Frères where you can choose from many French style bistros, each charming and less touristic (and expensive) than the one’s you’ll find on larger streets. Notable places to eat are l’Annexe 13 Rue des Trois Frères, Le Potager du Père Thierry, 16 Rue des Trois Frères and le Refuge de Fondus for, you guessed it, cheese fondu (but you won’t guess what you’re drinking the wine out of!) 17 Rue des Trois Frères.

But do keep an eye out for restaurants as you ascend the hill towards the Sacré Coeur as you might find a table with an incredible view. A special mention goes to le Moulin de la Galette for traditional French food steeped in Montmartre history, 83 Rue Lepic, 75018 Paris.

For more food addresses in this area check out the blog by Chef Maxime Papin, who takes you through his day well spent in the Paris 18th district as a Chef.

Established in Montmartre in 2007, this cooking school offers classes in English for all kinds of French cooking from croissants and macarons to pairing cheese and wine! If you want to explore the French market like a Montmartre local AND enjoy a three-course meal (made by yourself, Chef and classmates), join a French Market Class!

At the top of what is considered to be one of the most beautiful streets in Paris, you’ll find La Maison Rose. A place to have a brunch, lunch or simply stop for a coffee while you traverse the cobbled streets of Montmartre.

A wall that maintains Paris’ claim to being the city of love. You’ll find I love you written in every language. Grab your photo with a loved one (or enjoy a self-love selfie) and try to spot your language. 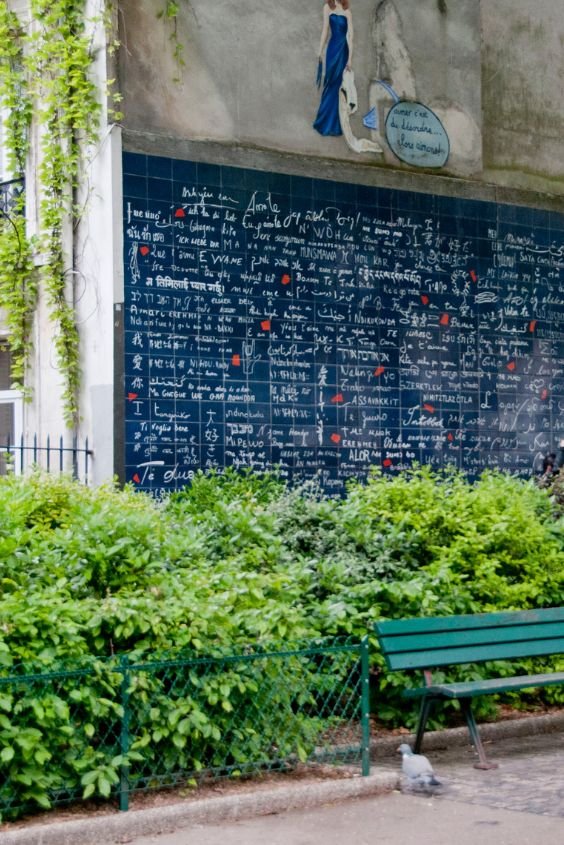 If you’re coming to Paris or are looking for some travel inspiration or even French practice, Amelie is the film to watch. It is a French modern classic and is as aesthetic as the story is quirky. the backdrop is entirely in the 18th arrondissement and once you’ve fallen in love with the charm of Audrey Tautou’s titular character, you can following her footsteps all around Montmartre. including the café where she works café des 2 moulins, 15 Rue Lepic. 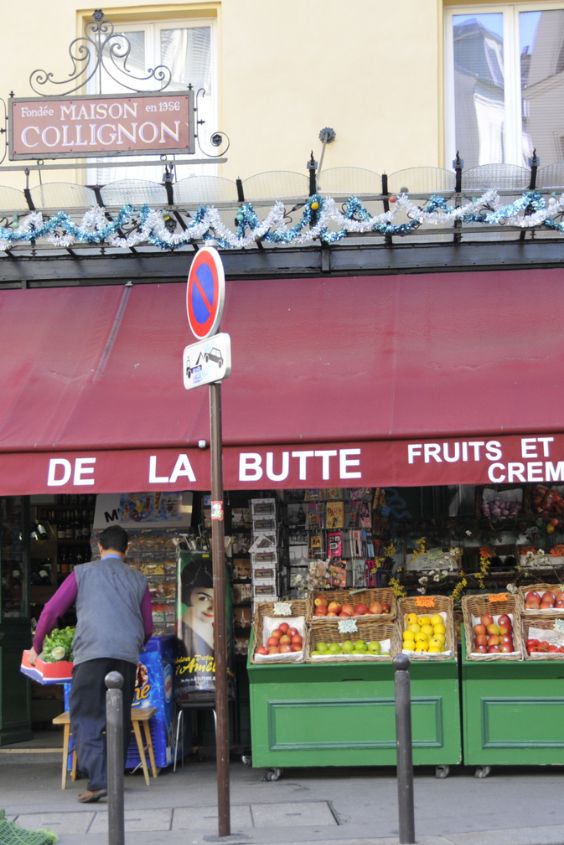 There’s no exact address for this one, you’ve got to keep your eyes peeled and follow some instructions to find the shot of Paris’ sinking house.

Head towards the Sacré Coeur and on the stairs up, on the final set before you reach the plateau, go towards the grass and when facing the monument. on your right hand side, you should see the orange building. Now the fun part for you photographers as you find the angle by the grass that will make the houses appear to be sinking. 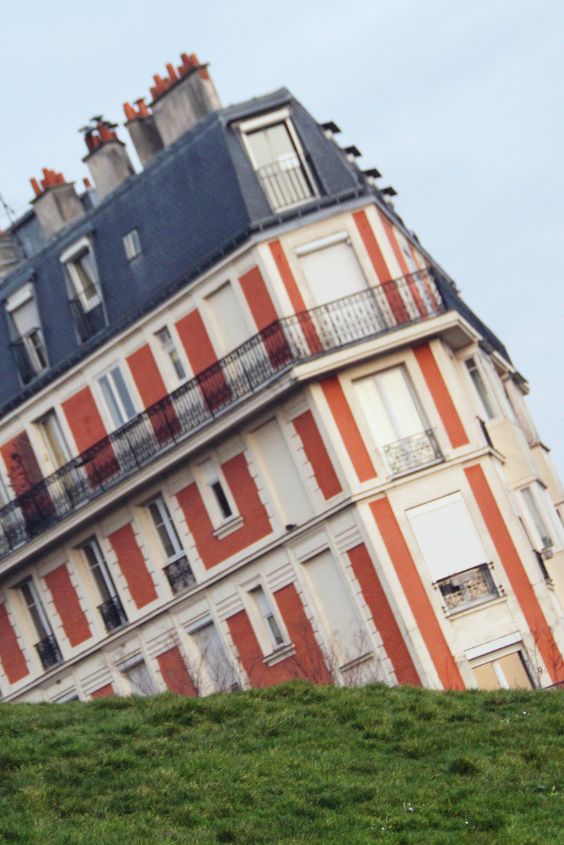 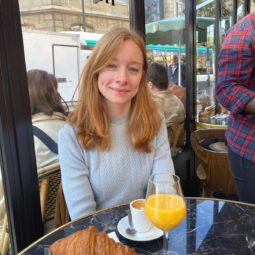 Jessica is a British native who left her home country to discover the world until she decided to stay in Paris and why not? There's so much to discover! The city is always changing but certain things stay true. Good wine, good food, good times. She's based in our cooking school in Paris but she's also present in our virtual world on the blog and our social media (scroll down to follow us on Instagram and find out more).