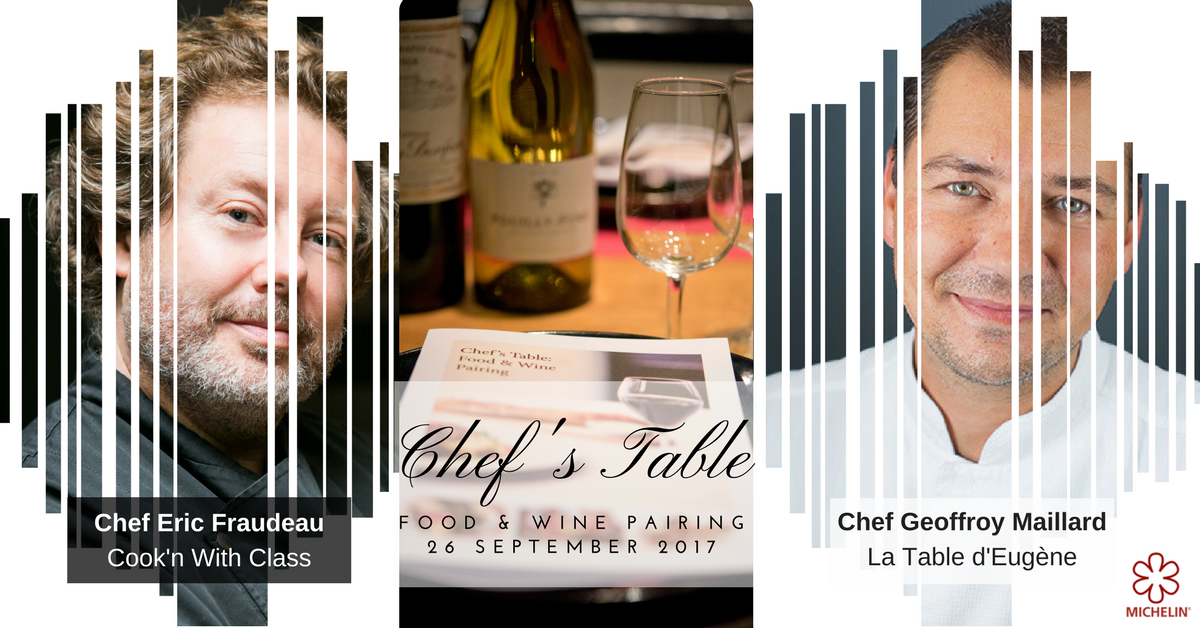 You should not expect an evening of Chef’s Eric’s cuisine or Chef Geoffroy’s cuisine, but rather a union of both their styles around what is fresh and in-season. Both chefs began their culinary careers at the age of 16. Chef Eric has had the opportunity to work in the kitchens of Alain Ducasse & Joël Robuchon before he headed overseas first as sous-chef and then executive chef in a number of high-end hotels in North and Central America. Chef Geoffroy, before obtaining his Michelin-star in 2015, ran his little bistro gastronomic in Montmartre for 7 years to the delight of the local inhabitants. He sharpened his knives and skills in the kitchens of Le Bristol & La Plazza Athénée and has certainly merited the accolades he and his sous-chef & associate François Vaudechamp have received. 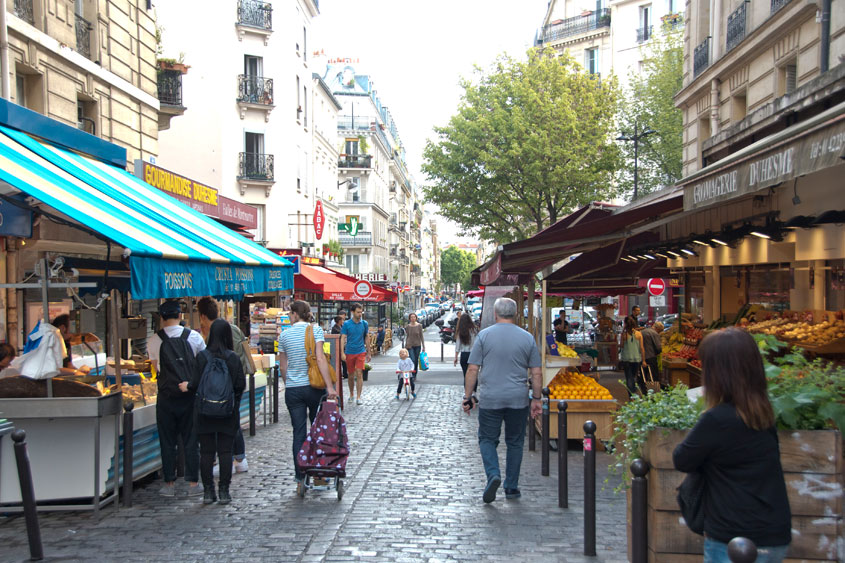 It all starts with a market visit

Right in line with the concept that launched the school, our two chefs will shop together to source the freshest produce from a local Montmartre market and their menu will be a result of their finds. This duo bring to the table over 20 years of culinary experience. Expect to partake in a 5-plate tasting menu expertly paired by 5 wines selected by our sommeliers, Mona Khalife and Frédéric Duverger. Mona, joins us after working with the likes of world-renowned sommelier Philippe Faure-Brac. Frédéric, is a WSET certified sommelier and owner of Cannes You Taste, a company offering wine consulting, sourcing & distribution.

This unique class will allow guests to engage with their chefs about their cooking styles and ingredient selections as well as provide a lesson in food & wine pairing. Be ready to have your palettes delighted and your knowledge of French food and wine deepened.

An event that has been a long time coming

The idea was born from a love of the cuisine of chef Geoffroy Maillard well before he obtained the coveted star. A cuisine that you could describe as simple, elegant & accessible. With the French cooking school, Cook’n With Class, calling Montmartre home, dining in the neighbourhood was both a necessity and an duty of sorts. It only took one meal for Chef Fraudeau’s wife, Yetunde Oshodi-Fraudeau, herself a student of the culinary arts, to be convinced that this would be their local “cantine”. Chef Maillard’s La Table d’Eugène quickly made it to the list of restaurant suggestions given to eager students at the school.

There was more that connected these two chefs who represent two different generations of French cuisine, than food. Turns out it’s true what they say about 5 degrees of separation. Who should one day knock on the door of this charming Paris cooking school but Constance Deledalle. Chef Constance who was destined to become a member of the Cook’n With Class team had previously worked with chef Maillard at Le Bristol under another Eric, chef Eric Fréchon. Small culinary world.

And what if they teamed up one day

While the ambitions of our two chefs differed, their passion for good, simple food united them. Asked if he would ever consider punctually teaching a class or two at Cook’n With Class, Chef Maillard responded by saying, “avec plaisir”. He liked the idea but somehow it’s taken almost 7 years of friendship to make it happen.

It’s now 2017, 10 years after the school opened, and 2 years since chef Maillard received his first Michelin star. It seemed like the perfect moment to make this dream a reality. But you can imagine that the life of a Michelin-starred chef is quite full. Lucky us, when a chef calls another chef friend, they mean it.

We hope that you’ll be able to take part in this momentous occasion, helping to celebrate 10 glorious years of French cooking, baking, tasting & sipping in Paris. We can’t wait to see the results.

For more details on this special event, click here. 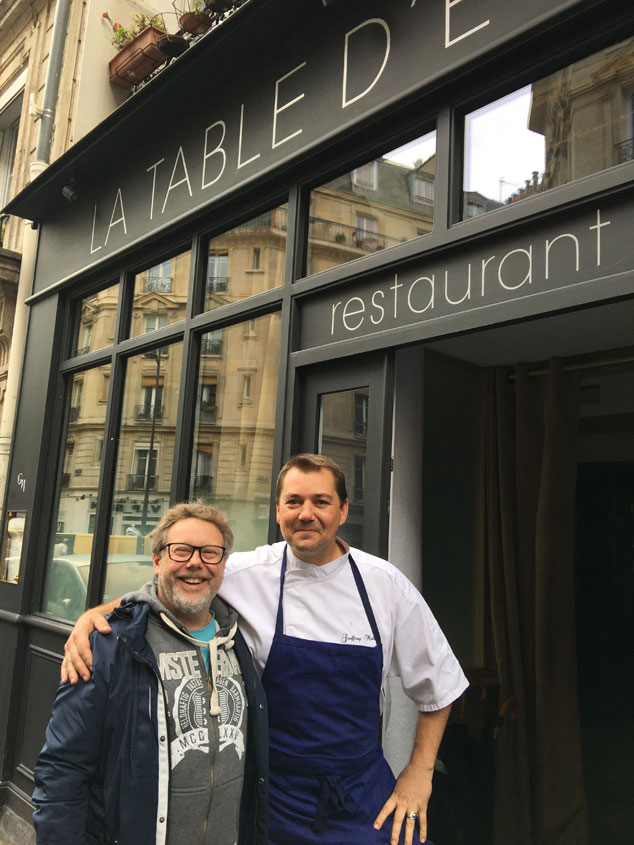 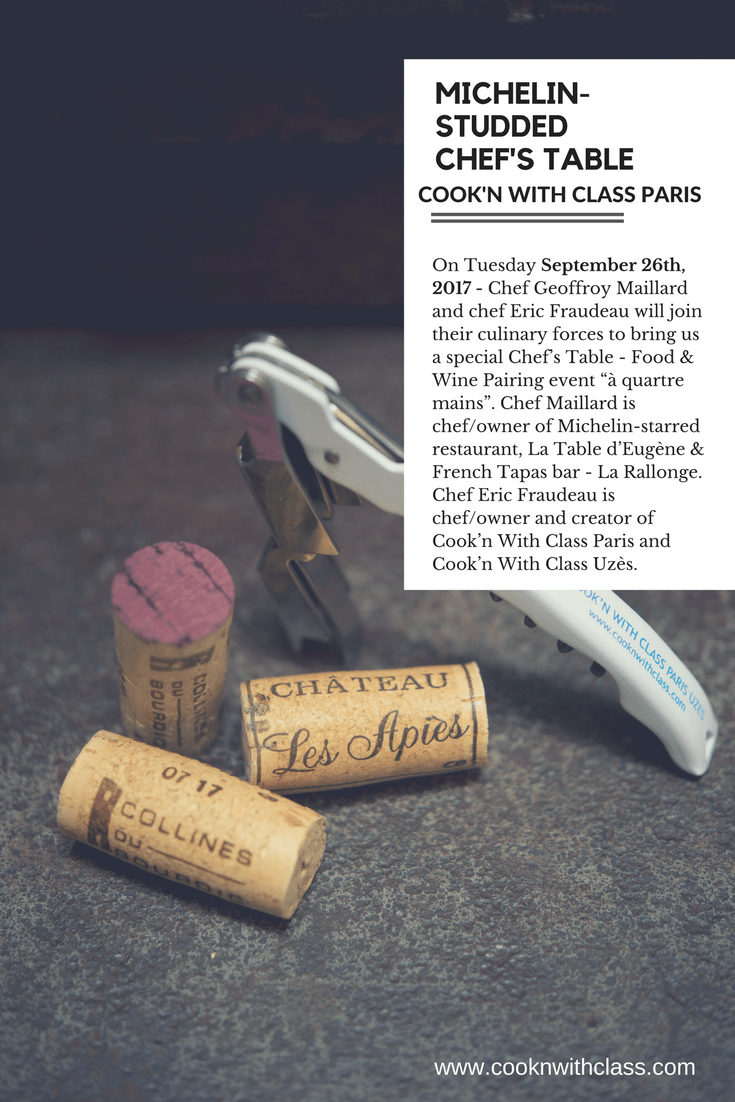